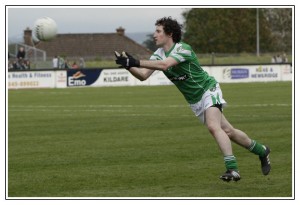 Who was your childhood hero?

Who’s your best friend on the team?

I get on with all the lads really…

Who’s the Hardman of the team?

I’ll go with James Lonergan although the full back for Laurences might say Philly!

Aaron Mullins is pretty quick over the first 10 yards.

Who’s the Joker of the team?

Alan Melia is never short of a smart comment or two. You need to be on your toes when he’s around.

Who’s the most skillful?

Who’s the most intelligent?

I don’t want to say he’s the least intelligent but Daryl Flynn has come out with some interesting comments over the years!

Who has the worst dress sense?

He retired this year but I’ll have to go with Kenny Duane. It’s not that he had the worst dress sense, it’s just he didn’t care what he wore. He used to be fond of wearing his croc shoes too.

Who is the best dancer?

Moggie springs to mind for some reason. He’d probably be the most energetic on a night out anyway!

Who is the worst dancer?

I’ll put myself forward, there’s a reason I stay away from the dance floor!

Who’s the best player you have played with?

Michael Ryan was pretty lethal in his day.

Who’s the best player you have played against?

I marked Alan Brogan years ago, he was a tricky customer. Eoin Brosnan was another tough opponent.

Who’s the biggest whinger on the team?

Lee Murphy likes to have a good moan.

Well Kevin Murnaghan was allowed to sit out training last Sunday just to have a rest so he must be on the manager’s good side!

This entry was posted in Team-mates. Bookmark the permalink.