Congratulations to our Under 14 Team and management who beat Naas 8-16 to 3-02 in the league final.

After losing the Feile D final to Maynooth after extra time a few weeks ago, Moorefield Under 14B team were determined to win this league final on Thursday night. The Moore’s got off to a flying start scoring 3-05 in the opening ten minutes. Cormac Kelly opened the scoring within the 1st minute with a good point from play followed by a point from centre half forward Nathan Williamson. Full forward Adam Meehan won a great ball in the 3rd minute and beat Naas goal keeper Ross Waters for their first goal. Nathan Williamson kicked his second point in the in the 5th minute followed by a good point from Jack Hannon who made a great run from the full back line to knock over a score. Cormac Kelly scored the Moore’s second goal in the 7th minute followed by another good point from play from Nathan Williamson. Scott Kavanagh scored the Moore’s third goal in the 9th minute after a good ball from Gary Redmond to put them into a comfortable 3-05 to 0-00 lead. Naas were working very hard but found the Moore’s defence very hard to break down, with Jack Hannon having a great game in full back and Jack Casey and Evan O’Brien controlling the half back line. The Moore’s were playing with a strong wind and continued their scoring spree with Sean Morrissey and Nathan Williamson adding goals in the 12th and 13th minute. Gary Redmond, Nathan Williamson and Cormac Kelly added points before Naas got their first score in the 24th minute when full forward Rory Quinn scored a superb goal. Moorefield replied instantly with points from Jack Casey (2), Adam Meehan and Ciaran Campbell to leave a half time score of 5-12 to 1-00.

Moorefield opened the scoring in the second half when Gary Redmond pointed from a free in the 4th minute followed by two excellent points from Sean Morrissey. Rory Quinn scored Naas’s second score of the game in the 10th minute when Andrew Lyons won possession and sent in a great ball to the full forward who beat Moorefield’s Dylan Quirke for a goal. Centre half forward James O’Reilly kicked an excellent point from play in the 13th minute but the Moore’s replied with three goals coming from Ciaran Campbell, Sean Morrissey and Gary Redmond. To their credit Naas refused to give up and worked hard to secure some scores and their hard work paid off with Rory Quinn scoring 1-01. Nathan Williamson kicked the last point of the game with another excellent point from play to win the game 8-16 to 3-02. 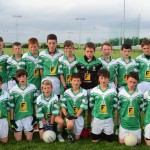 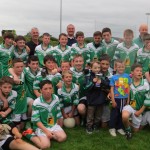 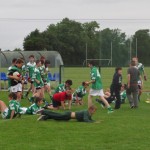 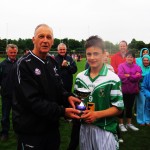 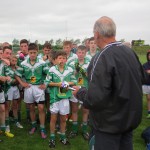 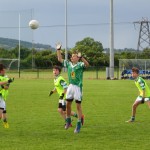 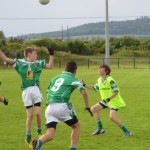 Date 23/06/2013
Played:- in Moorefield
Weather:- Windy
Moorefield played the first half against the wind which had a big factor on the match
Half time score Moorefield 2-2 Kilcock 1-5
Moorefield started well with the aid of the strong wind in the second and kicked some excellent scores
Final Score Moorefield 4-14 Kilcock 2-6

Final is on Friday 28th June at 6.45pm in County Ground against Naas.

This entry was posted in Roll of Honour 2013, Team-mates. Bookmark the permalink.