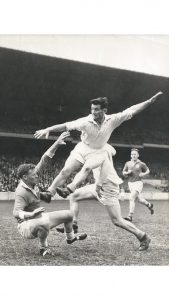 A top-class Moorefield and Kildare Footballer

Jimmy Cummins, the Moorefield, and Kildare dynamo, who graced the playing fields of Kildare and many other counties went to his eternal reward on Monday 1 February, the feast St Brigid. His passing has broken one of the few remaining links with the history-making team of the late-1950s and early-1960s.

Most great players are known for their size, strength and ability to master the tussles and battles against all-comers; but by the age of 22 Jimmy Cummins was described as “one of the best ‘small men’ in football in the province”. The Moorefield man had a stellar career with club and county. He first hit the headlines when his club won three successive Leader Cup titles (1958-’60).

Following the first Leader Cup win on 12 December 1959 (the 1959 final was played before the 1958 final), Jimmy Cummins was called into action for the county at corner forward on 6 March 1960 in a National League match against Kerry in Athy. In a twenty-year-long career with Moorefield, and nine years with Kildare, his last outing for the county was on 9 June 1968 in a Leinster championship match against Laois.

Considering that Jimmy played alongside many Kildare senior footballers who became household names throughout the country following a Leinster senior title in 1956 and an under-21 All-Ireland win in 1965, he was most certainly a man who punched well above his weight and height. On his inter-county debut, he lined out with fellow Moorefield man, Toss McCarthy who captained the club to the three Leader Cup wins and the 1962 county title. His time in the all-white jersey saw him play alongside Danny Flood, Paddy Gibbons and Paddy Moore of the 1956 Leinster winners and with almost all the under-21 champions of 1965. Kildare’s first All Star, Ollie Crinnigan, Pat Dunney, Tommy Carew, Kevin Kelly, Pat Mangan and Jack Donnelly were among the most famous of those names over a 15-year period, Crinnigan and Carew being the last of those to retire in 1980.

After eight games in attack – four at No. 12, three at No. 15 and one at No. 10 and one game as centre-forward – he played as a defender for Kildare – 38 times at right half-back, on four occasions at left half-back, and at left corner-back in his last 14 matches, a total of 65 appearances as a first-choice player in official competitions over nine years.

During his career he played in 36 National League matches, Kildare winning 21, drawing five and losing 10. The wins were against Wexford x 5, Cork and Carlow x 3, Dublin and Laois x 2 each, and once against Donegal, Westmeath, Offaly, Kilkenny, Waterford and Sligo. Drawn games were twice against Carlow, and once against Kerry, Cork and Sligo. Losses were to Kerry (4) and Cork, Dublin, Carlow, Wexford, Galway and Down, the latter in the 1968 League final by 2-11 to 2-4.

Jimmy was on the first Kildare team to win the O’Byrne Cup on 25 November 1962 and lined out in 12 games in O’Byrne Cup competitions, winning 10 but was on the losing side in the 1965 final against Longford. On 24 March 1963, he laid on the vital pass for a crucial goal in an O’Byrne Cup game against Carlow to give Kildare a narrow win by 1-2 to 1-1 – just three weeks after Kildare had beaten Carlow by 9-7 to 0-1 in the National League. Both games were played in St Conleth’s Park.

Paying tribute to Jimmy Cummins, Moorefield Chairperson Mick Moloney said “Jimmy was a major figure in the revival of Moorefield football fortunes in the late 1950s. His reading of the game was a key factor in his team’s success in three successive Leader Cup wins in 1959,’60 and’61 as well in the club’s first senior championship win in 1962. He was widely admired as a player with club and county but moreso as a family man who worked for many years in Irish Ropes. On behalf of Moorefield club, I wish to offer our sympathy to his wife and family at this very sad time. May Jimmy rest in the peace he deserves after a long service to family, in work and in sport”. 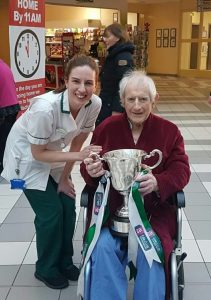 Numerous match reports testify to Jimmy’s amazing performances throughout his career. Indeed, it would be exceptional to find a report in which his name is not mentioned. Some examples testify to his consistent brilliance as a great defender for club and county.

“Take a bow, Jimmy Cummins, dominating little Goliath of the O’Byrne Cup encounter in Droichead Nua on Sunday. Carlow, intent on erasing the memory of the 9-7 to 0-1 NFL defeat of three weeks ago, went very close to doing so, and but for the Kildare half-back would surely have won this battle of the mud. Cummins was there to smash most of their promising attacks and, with Kildare two points in arrears and the sands of time running out, he ‘made’ the golden goal which McNally slammed home to pull the game out of the fire.”

1962 County Semi-final 21 – April 1963: “The half line of Jimmy Cummins, Joe Moran and Dave Stapleton proved a big stumbling block to the Kilcock forwards.”

1962 County Final: Moorefield 2-12 Kilcullen 0-2: “Joe Moran, Jimmy Cummins, and Jim McDermott were most noted in a sound Moorefield defence and one must again record the fine efforts of Jimmy Cummins, surely one of the best ‘small men’ in football in the province today.”

Kildare 0-11 Wicklow 0-4, O’Byrne Cup 27.3.1965: “It was the old hands, especially the half-back line, who contributed most to the winning of a ticket to the second round of this Accident Fund competition. This trio gloried in the conditions and only on rare occasions were they beaten for a ball. Apart from zealously guarding their own line, they found time to help an overworked centre-field. Cummins, on one occasion, in the second half, found time to roam upfield and send over a splendid point from forty yards out.”

(Leinster Leader 27 March 1965) Surely, one of the first attacking half-backs!

Kildare 4-10 Carlow 2-9, SFC 23.5.1965: “The half-line of defence showed an unusual lack of soundness … and it was left to the dashing Cummins to bolster up the weakness. This he did in magnificent style. For those who doubted the current worth of Cummins, this was the answer. He vied with his corner man, Moore, for the day’s defence honours.”

Moorefield v Clane SFC drawn game: “The game was decorated by several outstanding individual performances, but for a sixty-minute non-stop exhibition of first-grade defensive football star of the thirty rating must go to Moorefield’s

1965 SHC v Curragh: “Inter-county footballer Jimmy Cummins, making his hurling championship debut (with Moorefield), was a surprise packet in attack where he showed some clever touches which led to scores.”

In a factory match against Roadstone: “Jimmy Cummins was the only man to merit mention.”

Kildare 0-7 Laois 0-4, NFL 10.3.1968: “Jimmy Cummins had a rare tussle with the youthful but potentially great John Lalor. This flyer has a big future in the football world, and one ponders as what the result would have been opposed by any other defender but the Moorefield man.”

Kildare 2-8 Offaly 1-8, NFL 31.3.1968: “Jimmy Cummins as usual played his part and one particular save off the line in the first half deprived Offaly of a certain goal.” 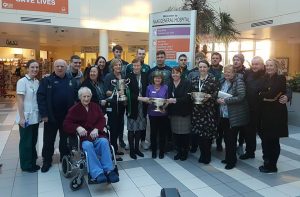 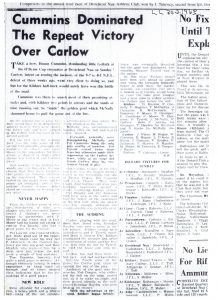