Away From Home with Les Hogan

Brief Description of yourself. Any close family? Where were you living back home? Where are you living now? Occupation? Where did you go to school etc?

Les Hogan, I’m 32 years old originally from lakeside park. Living back in Newbridge are my parents Mary & Andy. I have a twin sister Lynn, an older sister Andre and my older brother Tom who lives in Manchester and 2 nephews Senan & Zack

I live and work in Manhattan, New York

I’m a super for a construction company we do all high rise work i.e doing interior build outs and at the moment we are taking down a 22 story building. I went to school in Scoil Mhuire and the PBS Secondary School in Newbridge.

Well I think I won everything under age except a minor which stands out more than all the underage wins.

I won 2 u21 championships. One of which I was captain for.  Senior b (league champions and Jack Higgins cup winners) all in the 1 year under paddy Collins. That happened in 1995

Senior; well not sure how many leagues we won but when we won it in 96, it was huge at the time as it was the start of the good times.

I won 2 senior championships, first was in 2000. I didn’t play the in the last two games though because after beating St.laurences in ¼ final I got injured. In 2002 I was captain of the team. 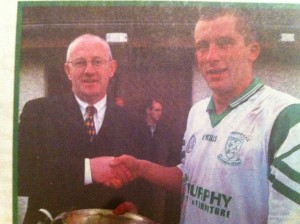 Managers, there were so many but Gerry Moran, Noel Golden, Tony Doyle and Peter White stand out.

Most memorable would be in 1995 with Paddy Collins team ,we weren’t supposed to have a chance but still ended up winning.

Also the holiday to Lanzarote after the championship win, which 30 players and 50 supporters went on. What a holiday!!!!! 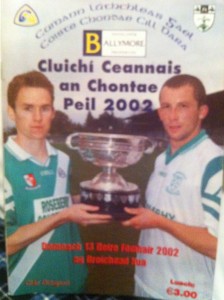 I don’t play anymore, I haven’t played since I was 26. I found it very different as in the clubs here don’t really care about the players and I’m not involved in any club I played with St Brendans in Chicago

Family, the craic!  The yanks just don’t get it lol  Just been able head down the town and knowing u would bump into someone you know. And a good pint of Guinness!!

Well the weather!!  Everyone knowing your business.. And the weather !!

For me it was definitely  SOS,  great player great man

Get a job straight away and make sure you turn up for work each day .Don’t get to caught up in the drinking partying scene it happens a lot

Finally, any words to send back home to   friends and family?

Just to say ill see everyone soon somewhere have a great and happy Christmas and best of luck to the club in 2012 l`ll be routing for u lot. 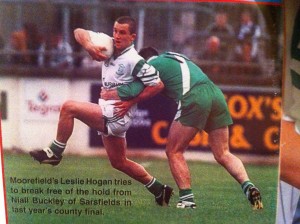 Les getting the better of Nuxer Buckley