Getting Back To Play Is A Dream 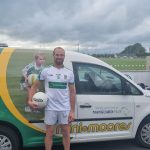 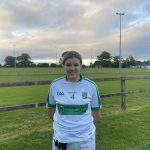 Like everybody, we at Moorefield GAA have missed being able to get out and kick about, train and play so it’s a joy to be able to resume all this again.

We caught up with Kevin Murnaghan and Ava Morrissey, two of the dynamos that represent all that is positive about our club and who are jumping for joy being back doing what they love.

Catching up with his team is vital for Kevin who says not being able to see his colleagues was one of the hardest things about ‘lockdown’.

“I missed the craic with the lads something fierce, the bit of chat, the camaraderie, everything really that Moorefield is all about, it knits the whole community together so not being able to come together was terrible really”.

“ You don’t actually realise what you miss until its gone and maybe that will be the everlasting lesson we learn from Covid. Maybe we’ll all appreciate everything a bit more from here on. I think routine is so important in a person’s life. Sport is incredibly important for mental health and that is one of the messages I’m keen to get out as so many young people are grappling with mental health issues at the moment. Training is hard but you do get so much back in return. People in the community tend to respect the fact that you put the hard graft in. It’s a little community here, a little family. Young lads and ‘oul lads, we all get on and we have each others back, there is always somebody to talk to no matter what and this is priceless”.

The 33 year old who plays wing back and midfield says joining Moorefield was quite the thing for him as his family was noted for its allegiances to Sarsfield’s and so it caused some friendly ripples!.

“Oh the banter and the slagging was unreal. I started in Sarsfield’s under 8’s .We were Sarsfield’s out and out, all my family were great Sarsfield’s fans and when I went to Moorefield—well you can just imagine!!!”.

“All clubs are brilliant but I have a grá for Moorefield, it’s magic. We are delighted to have such solid support both from our loyal followers and sponsors . For example the backing of Manguard Plus helps to secure our future and such a loyal sponsor is hard to find. They put in the hard graft like we do so it’s a good team, literally. We have an exciting season ahead of us now and we’re all putting our shoulders to the wheel and happy to do so”.

For her part, Ava Morrissey is delighted to be back doing what she loves best, lining out for the Moorefield Senior Ladies team.

“It is great to be back playing after the past year we’ve all experienced .Moorefield is more than just a club, it is a family. I have made friends for life through playing Gaelic, everyone single person involved in the club is terrific and inspiring”.

“It’s great to see so many of us back up and good to have Mark Doyle and Glen Collins onboard with us this year. I play any where in the full forward line, usually corner forward. The intensity at training has definitely been upped this year, it’s great to see lots of the younger girls coming up and playing alongside the more experienced girls. The lads will definitely find it tough to pick a team this year”.

“I began playing with Moorefield when I was 11 on the under 12 team, after becoming fond of the game from playing with Scoil Mhuire, Ballymany. I have been playing with Moorefield for almost ten years now and have had many highs and lows over the years. In 2016 we won the minor championship final against Eadestown, the following year I made it onto the senior ladies panel in which we had back to back victories, winning both the league and intermediate championship. I even made my senior debut that same year so it was an all round great year and by far my greatest achievement to date”.

“That said, the season ahead is so exciting and I am loving getting stuck back in. I’ve missed training and playing so much; I’m over the moon to be back. Go Moorefield!”.

This entry was posted in Manguard Plus and tagged Ava Morrissey, Kevin Murnaghan, Manguard Plus. Bookmark the permalink.