A Tribute to Jimmy “Ba” Dowling

‘A Mighty Oak Has Fallen’ 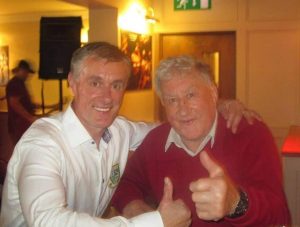 When the deeds of great and famous Moorefield men are recalled, and the best 15 players of all time are selected to represent the club founded in 1882, Jimmy ‘Ba’ Dowling is certain to be on the team sheet. His passing on Saturday last breaks one of the few remaining links with the team of 1962 which brought the first of 10 county senior titles to Moorefield.

Revered by teammates and feared by opponents, the ‘Ba’ was a man of huge stature in every way: physically very strong, protective of his colleagues, forceful in the tackle and courageous in defending his space on the pitch. If a forward got by him, and scored, he earned it. Likewise, if he went for a score himself, only the bravest defender would stand in his way.

Jimmy Dowling was an accomplished footballer and hurler, with numerous medals to his credit. Pride of place in his collection is that for the 1962 senior football championship, the first time Moorefield won the title in the 80 years since the club was founded (the final was played on 12 May 1963). Jimmy and a small number of dual players won the double in the same calendar year, a feat repeated by few clubs over the past six decades.

The preface to the ’62 title was the Leader Cup trilogy of the 1958, ’59 and ’60 victories which paved the way for ultimate success, the lifting the Senator Cummins Cup.

In 1956, Jimmy was mentioned “among the top performers for Moorefield” in the drawn Intermediate final against eventual winners, Kilcullen. A year later he deserved “special mention” in a league match in which Moorefield players “moved like a machine” with ‘Ba’ “outstanding”. His name appeared with regularity in Leinster Leader reports on Moorefield league, tournament and championship matches as “serving his team well”, “starring in a defensive role”, and in 1959 as being “too fast for the Killard backs”.

Such was his presence and influence, that it was reported in 1961 that “the retiring of ‘Ba’ Dowling early in the game had an adverse effect on the Moorefield side” in a Leader Cup tie with Raheens. In another Leader match, “’Ba’ Dowling was a hard worker and brought up the ball several times” turning defence into attack.

In the third replay of the semi-final of the1962 SFC against Kilcock, he was the only scorer – apart from Harry Fay who notched up 2-5 – and “his performance was the highlight of an otherwise poor game”. Jimmy helped himself to a point in the county final when Moorefield defeated Kilcullen by 2-12 to 0-2.

Some other quotes: “he shone in a mighty full-back line”; “Jimmy Dowling provided best cover for the goalkeeper”; “’Ba’ shone in a strong line of defence”; “he scored a great goal” in the 1965 quarter-final against Round Towers, and later, “Liam Casey and Jimmy Dowling had control; at midfield”.

Alex Whelan records many of the great achievements of our famous club in his history of Moorefield in 1984 and writes that “For the next nine years the team were the drawing card in the county, being invited into all the big tournaments and winning most of them”. Jimmy ‘Ba’ Dowling contributed handsomely to a golden era of Moorefield football and hurling.

On the hurling field, Jimmy was singled out as “one of a sound full-back line” as Moorefield won their way to the 1961 junior championship title. In the 1962 senior championship, he had one of his best hours in a Moorefield team that “surpassed all expectations to gain a surprise verdict” over Suncroft. A year later, he was one of the full-back line who “were rarely beaten by a variety of [Ardclough] opponents” and later winning that coveted senior hurling medal.

In a tribute to Moorefield hurlers, Stevie Schwer from Kilcullen who played in the 1963 winning team said, “It was better to be playing with them than against them”.

Jimmy came to prominence for the Lilies for three years as a minor in the early ‘50s. He won a Leinster junior championship medal in 1956, 2-8 to 2-3 against Wexford, and represented the county in the All-Ireland ‘Home’ final defeat to Monaghan. This paved the way for his selection on the county seniors in a National League match against Cork on 20 October 1957 which began a run of 10 successive appearances at full-forward during which time he scored 1-1 against Tyrone in a League semi-final before going down to Dublin in the final in Croke Park in which he again hit 1-1.

Club Chairperson, Mick Moloney, paid tribute to ‘Ba’ saying “he served the club in numerous ways – as a player, selector, team manager, masseur, supporter, committee member, and as Chairperson in 1970 and 1987. He brought his immense talents to many club teams and helped light a fire that blazed through a decade of unprecedented success in Moorefield. He was the catalyst for many a victory when defeat seemed inevitable. His spirit and that of his teammates lifted the gloom which enveloped Moorefield for many years.

“Jimmy Dowling was one of a group of men who crested a wave of success which spanned a decade, and which set the standard for every club team to emulate. He got tremendous satisfaction from seeing the club, in which his family have long been involved in playing and administrative capacities, win nine county titles and two Leinsters since 2000. Yes, he was a mighty man: a Mighty Oak has fallen, but he has left a legacy of many acorns to follow in his footsteps.

“On behalf of all Moorefield members and supporters I wish to offer our sincere condolences to Jimmy’s wife, Alice, son Seamus, daughter Collette, son-in-law Kevin, daughter-in-law Collette, grandchildren, great grandchildren, and extended family. May Jimmy rest in peace after a life of service to his family, community, work and Moorefield club.”

This entry was posted in News Feed and tagged RIP. Bookmark the permalink.