The sad passing of Tom O’Connell, a brilliant hurler and footballer, breaks another link in the chain of Moorefield players who brought great honour and glory to the club 60 years ago.

When Kilcullen hurlers threw in their lot with local clubs in 1956, Tom O’Connell and some of his colleagues came to Moorefield, thus beginning a superb rise in the fortunes of his new club. By 1963, he had won junior and senior county titles and captained Kildare to the 1962 All-Ireland junior hurling title.

His introduction to Moorefield hurling saw him recorded in the Leinster Leader as “playing excellent hurling”, although losing the ’56 county final to Broadford. In a 1957 senior league match, the midfielder was seen as “a county player by any standard”. And so, it transpired, despite Moorefield losing the ’57 final to Maynooth. He was among the most prominent in a loss to Ardclough (4-6 to 4-4) in the 1959 final.

The big breakthrough came in 1961: after defeating Sarsfields, the Moores accounted for Éire Óg in the semi-final where “Tom O’Connell was the dominant figure in the Moorefield defence”.

When Moorefield embarked on a title-winning run in the 1963 championship Broadford piled on the pressure to run out winners by 2-11 to 3-5 in the first round in which “Tom O’Connell was Moorefield’s outstanding player”. (Leinster Leader 17 August 1963)

Quarter-final: Moorefield 7-3 Ardclough 1-3 “O’Connell starred in a mighty full-back line in which Jim ‘Ba’ Dowling and Joe Moran who flanked the brilliant Tom O’Connell were rarely beaten by a variety of opponents”. (Leinster Leader 14 September 1963)

In the semi-final (Moorefield 4-2 Suncroft 3-4) “Tom O’Connell at full-back kept rolling back the attacks. The move that saw Moorefield through was bringing Tom O’Connell from full-back to midfield where O’Connell showed all his brilliance outfield, where his long, well-directed drives gave the losers’ defence a busy time”. (Leinster Leader, October 12, 1963)

Stevie Schwer (RIP) recalled: “Great celebrations followed the victory, and everyone was looked after by the club before returning to Kilcullen. Not being from the town, club spirit was different for the Kilcullen players … it was due to the efforts of Davy Dennis with his fantastic attitude and encouragement and the influence of Billy ‘Woodener’ Quinn that they felt so welcome in Moorefield”. 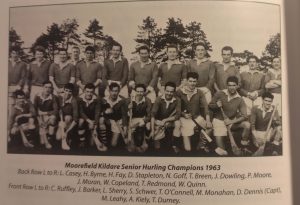 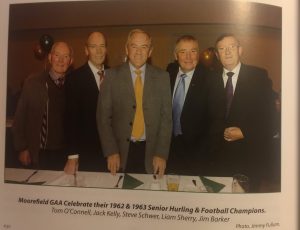 Tom O’Connell and Stevie Schwer from Kilcullen were Moorefield regulars on the county hurling team from 1958 to 1964. Both played on the All-Ireland junior winning team defeating Kerry by 7-15 to 5-2 in Croke Park on 9 September 1962 in the ‘home’ final, and in the final against London on 30 September by 4-7 to 2-4. O’Connell, playing in the No. 6 shirt, had the honour of captaining Kildare in 1962 All-Ireland final in which he scored two points.

As recorded in the club history, Moorefield players featured strongly on this team with Tom O’Connell as team captain, and Stevie Schwer, Jim Barker and Mick Leahy in the forwards. Moorefield subs were Frank Fogarty, Colm Ruffley and Jim Barker while Davy Dennis was a selector and team trainer.

Earlier in 1963, on 12 May, Tom O’Connell, Stevie Schwer and Jim Barker were in opposition to Moorefield when they lined out for ‘The Rags’, as the Moores defeated Kilcullen in the 1962 senior football final by 2-11 to 0-2.

Moorefield chairperson, Mick Moloney, paid tribute to Tom O’Connell saying “He was an outstanding player who contributed in great measure to the successes of Moorefield hurlers when they won the 1961 junior and the 1963 senior hurling championships. He led Kildare to Junior All-Ireland success in 1962 and his record of donning the centre-back and midfield positions from his National League debut against Roscommon in Athy on 27 October 1957 until his last outing against Laois on 8 November 1964, was truly remarkable.

“On behalf of the Moorefield club, I wish to extend the sympathy of our members and supporters to Tom’s wife Anne, his daughter Patricia, and sons Thomas, Seamus (James), David, Liam and Brendan as well as his extended family. May he rest in peace”.

This entry was posted in RIP and tagged RIP. Bookmark the permalink.