On this day 8 years ago we had our official opening of the clubhouse – 4 May 2013. What a great weekend of celebrations!

Attached is an excerpt from our Club History of our journey to our new grounds and clubhouse. 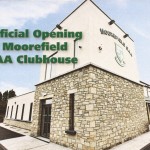 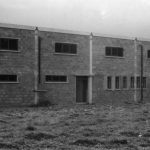 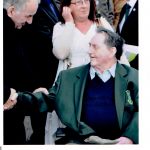 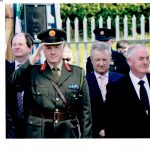 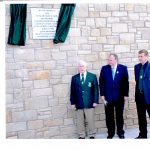 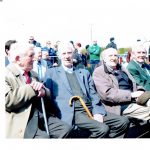 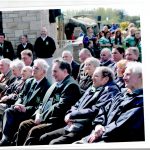 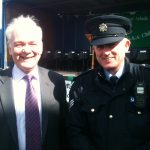 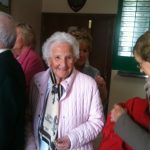 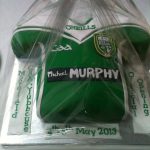 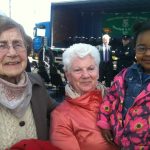 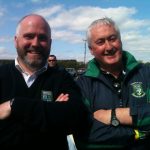 • 1981: John Joe Murray, Chairperson, Davy Dennis, Secretary and Alex
Whelan, Treasurer were appointed to seek a site for new club grounds
• May 1981: Clubhouse on Moorefield Road sold to Robert Hegarty for
£45,000
• June 1981: Nine acres bought at Pollardstown from Weldon Mather for
£44,000
• 1981-82: Development and fencing of main pitch and juvenile pitch
• 1984-88: Development of clubhouse and general facilities
Eric McDonnell’s Volunteers
The construction of the new club house was assigned to ANCO for reasons
of finance and also providing much-needed work for that organisation.
However, a decision to ‘up the pace’ of construction was taken and local
builder, publican and staunch Moorefield supporter, Eric McDonnell set up
a task force to assist with the huge workload. Eric quickly recruited a willing
team of local tradesmen (and some who had no trades but were willing hands!)
who gave unselfishly of their time and labour. These included good Moorefield
names such as Jimmy Murray, Seamus Dooley, Jim McDermott, Jimmy ‘Ba’
Dowling, Tom McDonnell and his brother Kevin, John Cummins, Alex
Whelan, and Alex Junior, Angelo Murray and his father Lauri, Bobby Foran,
Fish Craddock, Tommy Rogan, Paddy Folan, Paddy O’Brien, Andy Hogan,
Dinny Craddock, Paddy Anderson, ‘Tucker’ Shiels, the Naughton brothers,
Jimmy, Noel and Gerry, Giggs Blake, Leonard Dooley, John Pollard, Ross and
Wesley Cummins, Jimmy Murray, Tony Murray, Frank Whyte and William
Cummins. Eric acknowledges that a key factor in keeping everyone on board
was the ‘site canteen’ provided by Matt Farrell and Jimmy Kyne from a mobile
home located on the grounds.
• 19 June 1988: Clubhouse officially opened by John Dowling, GAA
President
• 1994 Authority given by the AGM to the incoming Executive Committee
to investigate the possibility of purchasing new ground and levelling the
existing pitch
130 Years of Growth and Development Moorefield gaa newbridge
457
• 5 April 1995: Special committee meeting called to discuss future club
development and the appointment of a sub-committee “To look into actual
procurement of ‘land’ and to plan development of same” and “To organise
and put into motion our next fundraising draw”.
• 1996: Loan of £€100,000 secured at 8.4% interest to purchase ten acres at
rear of first pitch followed by
1. Development and fencing of two full-size pitches
2. Development of main pitch and surrounds
3. Erection of scoreboard
4. Building of four new dressing rooms at new pitches
5. Laying out and marking of car park
• 2002: installation of floodlights on No. 2 pitch
• 2008: Club Moorefield established to fund development of club facilities
• 2012: Refurbishment of clubhouse including main hall, dressing rooms,
showers and toilets, meeting room, office, bar and kitchen by Paddy Collins
and Attic Storage Company. Paddy, his family and empoyees are very proud
of the new clubhouse and they enjoyed working on the project.
• landscaping and tarmacing of surrounds
Official Opening of New Clubhouse
• 4 May 2013: Official Opening of clubhouse by Liam Ó Néill, Uachtarán
Cumann Lúthchleas Gael and blessing of facilities by Rev Fr Joe McDermott,
PP, St Conleth’s Parish and Rev Dr John Marsden, Church of Ireland Dean
of Kildare

Club Moorefield
Another key factor in bringing about the new Sporting Complex was the
establishment of Club Moorefield. Members were asked to sign up and
pledge a monthly sum by direct debit to boost club funds. Over 200 members
responded to this request and this has been absolutely vital in helping the club
to meet its financial commitments and maintain the facilities which all enjoy
today.458

To date Club Moorefield has funded the following:
• Car park
• Dug outs and shelters
• Protective nets for all three pitches
• Street lighting alongside main pitch
• Fencing around the third pitch
• Repayments of over e50,000 per annum to Bank of Ireland

FOOTNOTE
• The first J J O’Kelly’s clubrooms on Moorefield Road, dating from the 1880s,
were destroyed by fire in the 1920s. A second clubhouse was then built and
this was replaced by a further building which was opened in February 1950
and sold in 1981.

This entry was posted in Archive 2021. Bookmark the permalink.